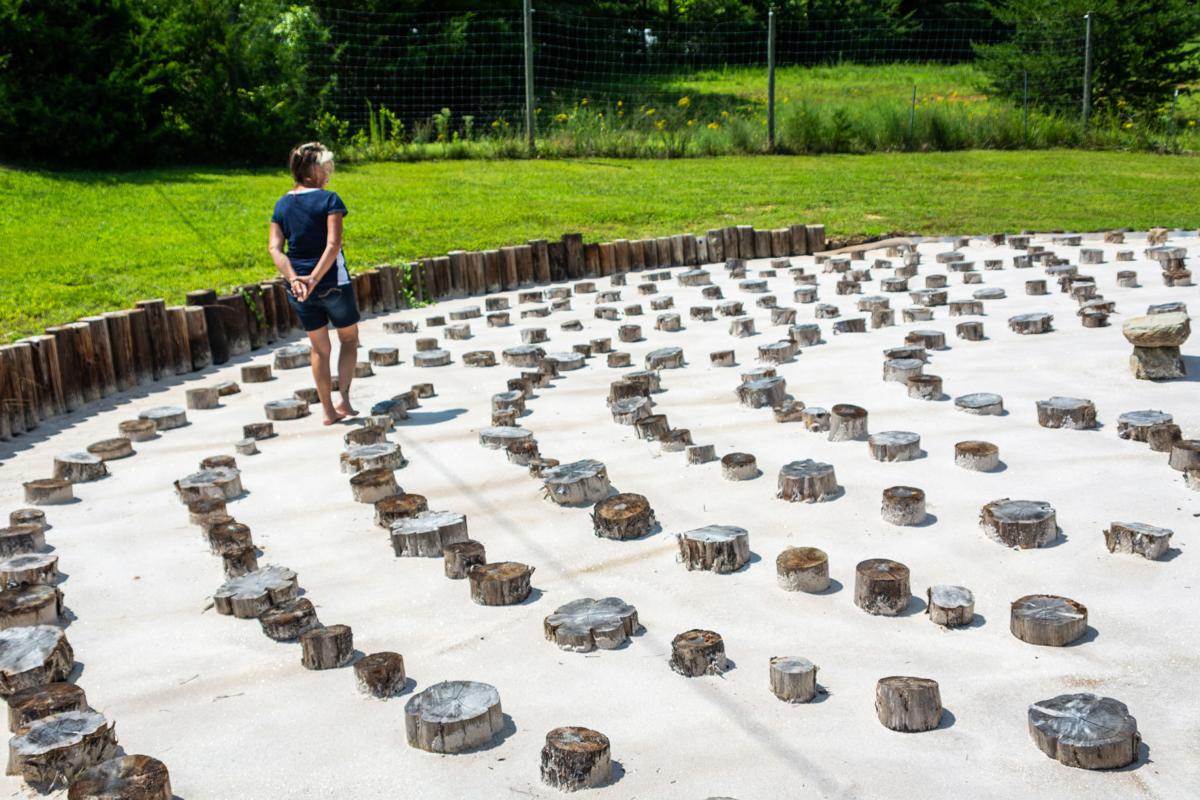 Recovering Hands founder Kim Adams walks through her home made labrynth, which is used as a calming place for meditation.
Halle Parker/Register & Bee

Although steps have been taken to limit the availability of prescription opioids as the epidemic gained more attention, the number of overdose-related calls and emergency room trips has continued to climb in the Dan River Region.

According to data from the Virginia Department of Health, the number of fatalities in the state steadily has risen since 2017, reaching 1,534 deaths in 2017. Between 2015 and 2016, the fatal overdoses increased by 38.9 percent across the state — the highest increase on record.

In its report based on the third quarter of 2018, the state health department predicted total fatalities in 2018 would reach 1,508.

Public safety officials and hospital staff said though the number of deaths never reached the heights of neighboring counties and southwestern Virginia, addiction and overdose remains an issue in Danville and Pittsylvania County.

Danville Life Saving Crew paramedic Jim Mullins said they saw their number of calls reporting an overdose-related emergency increase from 90 to 107 between 2017 and 2018. He said even those numbers may be underreporting the prevalence of opioid overdoses.

“Opioid overdoses can be misleading at times or they can even be hidden in a way,” Mullins said. The crew receives calls reporting difficulty breathing or chest pains most frequently, which can be “possible overdoses in disguise.”

But the rescue squad doesn’t know until they arrive, he said.

Pittsylvania County Sheriff Mike Taylor said his department also has seen an increase in calls each year since the spike in 2016 sounded alarms in the public sphere.

“We’ve certainly seen an increase in the number of overdoses with opioids and prescription medications,” Taylor said.

According to Virginia Department of Health’s data, the Pittsylvania-Danville health district has seen opioid overdose-related emergency room visits increase from 106 in 2015 to 141 in 2017.

From what Mullins and Taylor have seen, the victims cross all demographics. Taylor said he typically sees people between the ages of 34 and 50.

It can be anyone, they said.

The majority of them ail from chronic pain and in their search for a solution, they wind up addicted to their medication, said Mullins and Taylor.

“The same pill that you took twice a day doesn’t work the same,” said Mullins. “You’ll keep hitting it until you get the effect that you want. … You don’t realize that you’re depressing your respiratory system.”

Eventually, their tolerance to the medication increases and they increase their dose on their own.

“These folks that are addicted to this, they really want the help, and they’ll tell you that but they’re just at a point in your life where they just have to have professional help to wean themselves off of the opioids,” Taylor said.

SOVAH Health-Danville physician Jeremy Silvers said emergency room doctors see the epidemic on three levels — the emergency scenario where individuals are dying of respiratory failure, people who are going through withdrawal and people who come in requesting opioids.

Silvers said, when it comes to opioid-related overdoses, “I’ve seen at least once a week since the new year started.”

“For all overdoses, it’s more. It’s much more,” he said. He noted that some opioids, like fentanyl, don’t appear in a drug screen which could result in underreporting as well.

After an overdose, Silvers said that patient’s stay ends up costing upward of $100,000.

“That patient is going to require significant resources which takes away resources from other sick individuals and decreases the quality of care for something that is totally preventable,” the doctor said.

When people arrive to the emergency room in search of treatment for withdrawal or prescriptions, Silvers said they have to turn them away.

“People come in just hoping that we have a magic bullet or medication that can get them off,” he said. Or SOVAH Health has an inpatient treatment facility, added Silvers, which they don’t.

Kim Adams runs an addiction treatment program called Recovering Hands on her farm in Nathalie, saying she felt called to increase the amount of addiction services available to women in the area.

“When I moved here, I noticed there weren’t any treatment centers locally,” she said. “There seems to be very few resources for people to get help.”

She moved to Halifax County from Conneticuit in 2010 and worked to make Recovering Hands fully functional by 2016. So far, her program’s served seven women and two men, with another expected to arrive over the next week.

While people are in her program, they stay on the farm for 30, 60 or 90-day periods. Adams said the farm’s centered around “reclaiming lost lives.”

“I always say they really only have to change one thing and that’s everything,” she said with a smile. “What we teach here is you’re worth the effort to build a new way of life.”

After 28 years as a certified recovery specialist working in peer recovery, Adams said she’s trying to give people a place to come learn how to help themselves as they work on projects and learn life skills to make transitioning out of the program easier.

Adams said funding is a huge barrier to treatment that people face in a high poverty area like Southside Virginia. Even with her program’s cost set at $3,000 compared to the $16,000 of a typical treatment center, she said women have difficulties finding funds.

“I have received many calls from women and parents in Danville and Pittsylvania County, Halifax County as well,” she said. “The only reason I was not able to help those people is funding. They did not have any way to pay our fees and I can’t take insurance.”

While the increase in availability of drugs like Narcan and naloxone have improved the save rate of those who overdose, the issue of addiction remains.

Taylor said he could recall the drugs being used at least twice on the northern end of the county and successfully reviving the person.

“I think across the state in 2017 Narcan was known to have been used over 4,500 times and it had a 54 percent effective rate and that was a good thing,” Taylor said.

In response to the increasing numbers, Mullins said they’ve done more to try to educate the community about the dangers of opioids and also have begun treating people who call with chest pain or trouble breathing with Narcan or naloxone automatically.

He said he does wish the life-saving drugs were easier to administer, like an EpiPen, without encouraging people to feel like they can overdose and be revived.

“You want to deter rather than encourage them with a possible antidote that’s in your hand,” he said.

Mullins warned people who survive and overdose still suffer from loss of brain cells because of the lack of air flow or head trauma from fainting.

“Sometimes there are worse things than just dying from it,” he said.

Taylor said the issue will require continued intervention from higher levels of government than just local law enforcement before the issue is resolved.

Halle Parker reports for the Danville Register & Bee. Contact her athparker@registerbee.com or (434) 791-7981.

Scroll down to view this slideshow bigger.  If you would like to submit photos for next year’s slideshow, please email kim@recoveringhands.com

A member of the Virginia Association of Recovery Residences 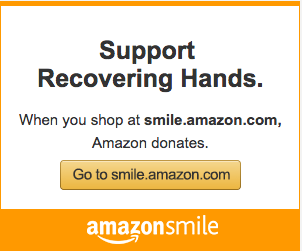 Opt in to Amazon Smile - Choose Recovering Hands as the 5013c charity of your choice and 5% of your purchases Automatically go to support our efforts!

There are no upcoming events. 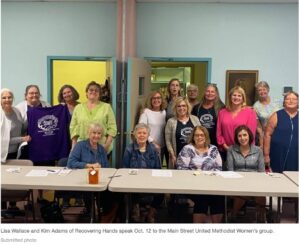 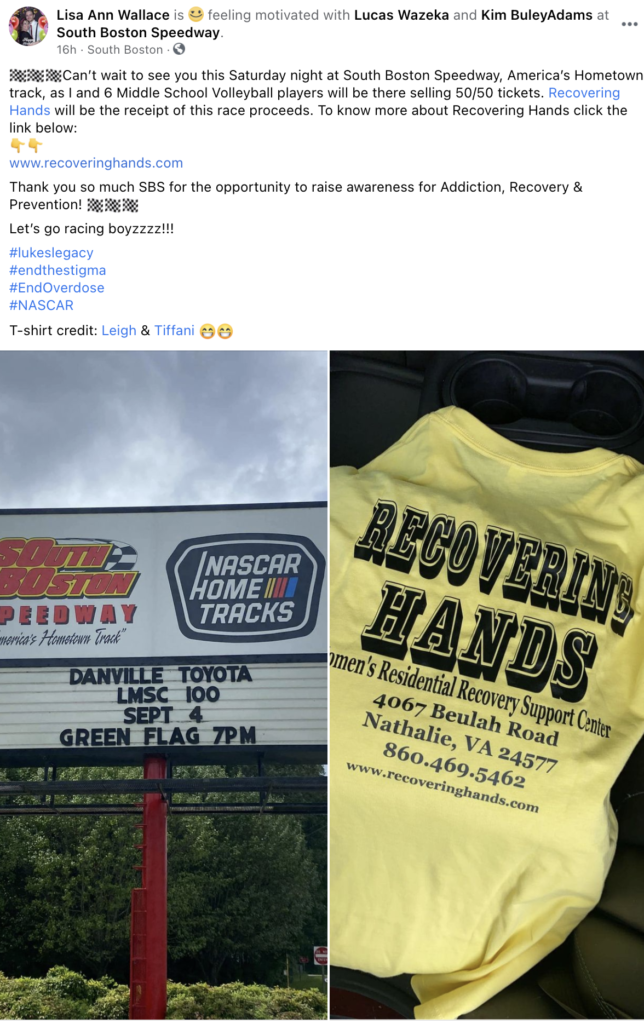 Recovering Hands In The News August 2021 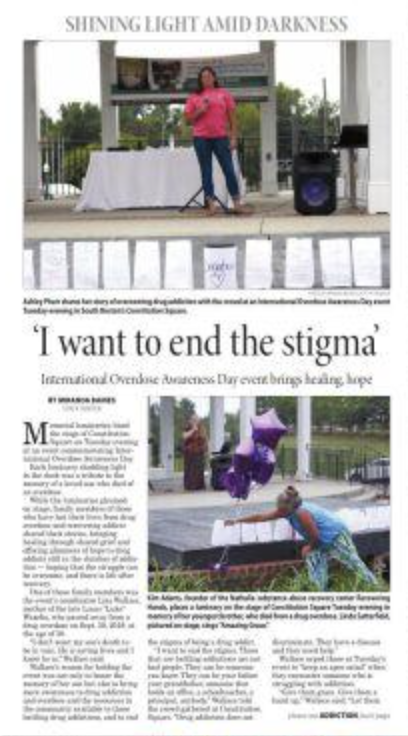 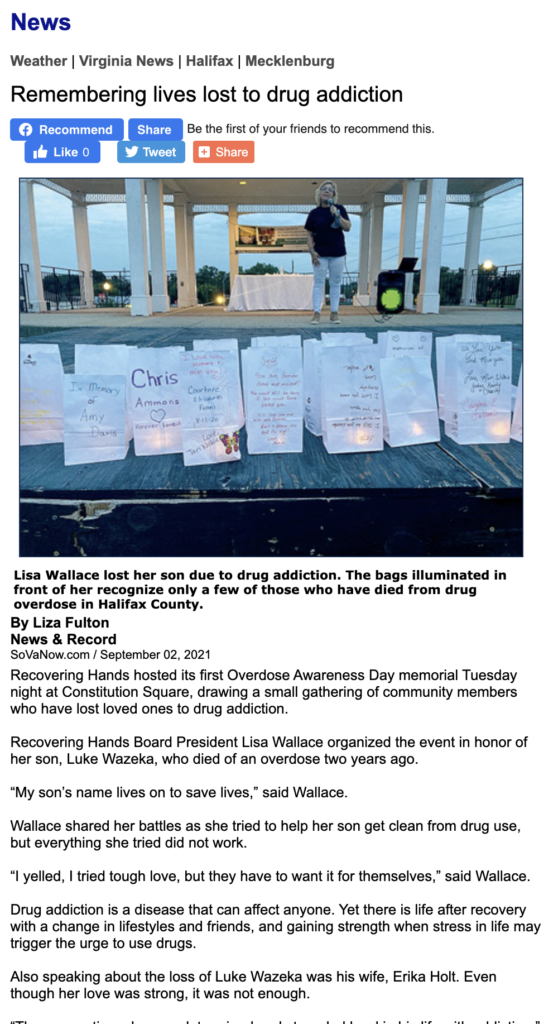 Recovering Hands In The News September 2019 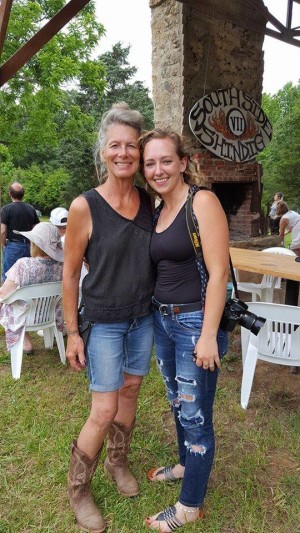 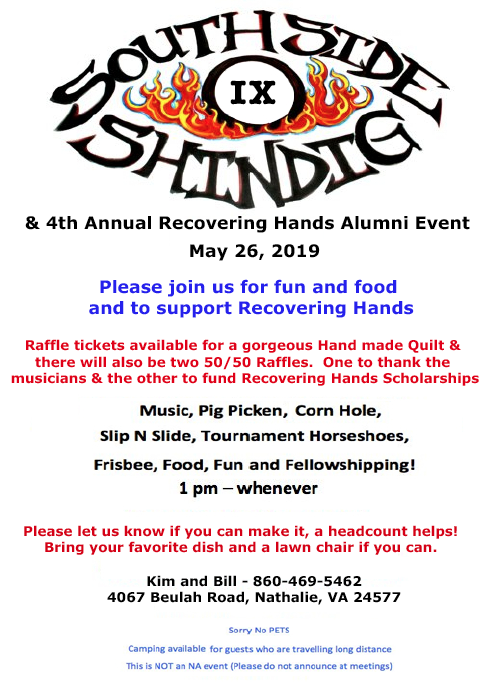